Best of the Blog, Design History

If you’re anything like me, over the past few days you’ll have grown pretty tired of the promotional visual language around Black Friday and Cyber Monday. But a look at history proves that these kind of informal, throwaway graphics can serve as significant documents of the times in which we live.

In this piece, we’re taking a look at the cover designs of 3 twentieth-century magazines — Good Housekeeping, The Saturday Evening Post, and The American Weekly. You’ll be fascinated not only by the evolution of their graphic language, but also by how they reflect changing social norms around the family and gender roles.

Founded in Massachusetts in 1885, Good Housekeeping is a mainstream magazine aimed at women. It continues to be published today, and is one of the world’s biggest global magazine brands. Scanning its November cover designs from the past 110 years gives a snapshot not only of changing graphic design language over the past century, but also of the radical social change that happened in that time.

In the early twentieth century, the front page of issues around Thanksgiving typically depicted children, and included nods to romanticised versions of the Thanksgiving story. The style was illustrative and evocative of a children’s book. Where women were depicted, they tended to be in domestic roles, or accompanied by a male partner (see November 1904). Even in a publication aimed at women, their identity around Thanksgiving is subordinated to the role of mother and wife. These are mirrored in the children’s roles, too: in the 1931 and 1932 covers, the girl works, preparing food and washing up; while in 1935, the boy is at leisure, waiting to be served, and in 1940 also performs gendered work (hammering).

This visual language stayed relatively unchanged until the 1960s, when individual women began routinely to appear on the magazine’s covers in preference to showing children. Coinciding with an increase in the use of photography, around this time celebrity culture emerged. Celebrity women model the evolution of gender norms; for example, in 1969, Sophia Loren is depicted bottle-feeding her baby — a new cultural image that combined motherhood with fame and success.

The basic pattern of Good Housekeeping front covers, featuring an individual smiling woman, remained quite similar through the decades that followed, though the tone of the cover’s messages shift from celebration (preparing recipes and choosing gifts) to anxiety (weight loss and medical problems). Overall the visuals become more noisy, with the covers increasingly crammed with text, competing for buyer attention in a crowded magazine market.

A fascinating departure from this design pattern comes in 2008, where a woman is depicted at the center of a multi-racial family, with renewed emphasis on home cooking and money-saving — perhaps reflecting both the watershed of Barack Obama’s election, the context of a global financial crisis, and an accompanying nostalgia for the natural security of the nuclear family.

In the past couple of years, there are hints of another major shift in the magazine’s visual language, with a renewed emphasis on hearty food, and markedly less prominent headlines about weight and health — perhaps an attempt to reposition the magazine for a millennial audience, who may be more likely to view these themes as themselves unhealthy obsessions.

The Saturday Evening Post between the 1900s and 1960s shows a similar trajectory to Good Housekeeping. Covers from the 1900s and 1910s show women in domestic roles, typically with children close by. In wartime, the covers give prominence to male soldiers (e.g. 1917) and relate the themes of Thanksgiving to those of world war and the sacrifices of military personnel.

Similarly, the 1930s was a period that followed an extreme financial crisis and witnessed political instability in Europe. The magazine’s November covers in the 1930s reinforce conventional images of masculinity, valorizing traditional conceptions of gender and family — see, for example, the covers from 1933, 1934, 1938 and 1939, which depict muscled male footballers and adulating young women. Note also how rare the depiction of non-white women is: the only example we have found here is 1936.

In the post-war period, representations of women become more powerful, with men depicted repeatedly as servers and onlookers in female action spaces: take, for example, the shop scene in 1948, or the parlor scene in 1953. The 1956 cover shows women’s increasing social participation: here they are represented not in the kitchen but partying alongside the men. Note that it is still only women, though, who are keeping an eye on the sleeping babies. Finally, in 1957, we have a stark visual depiction of how these rapidly changing social mores created an intergenerational divide. 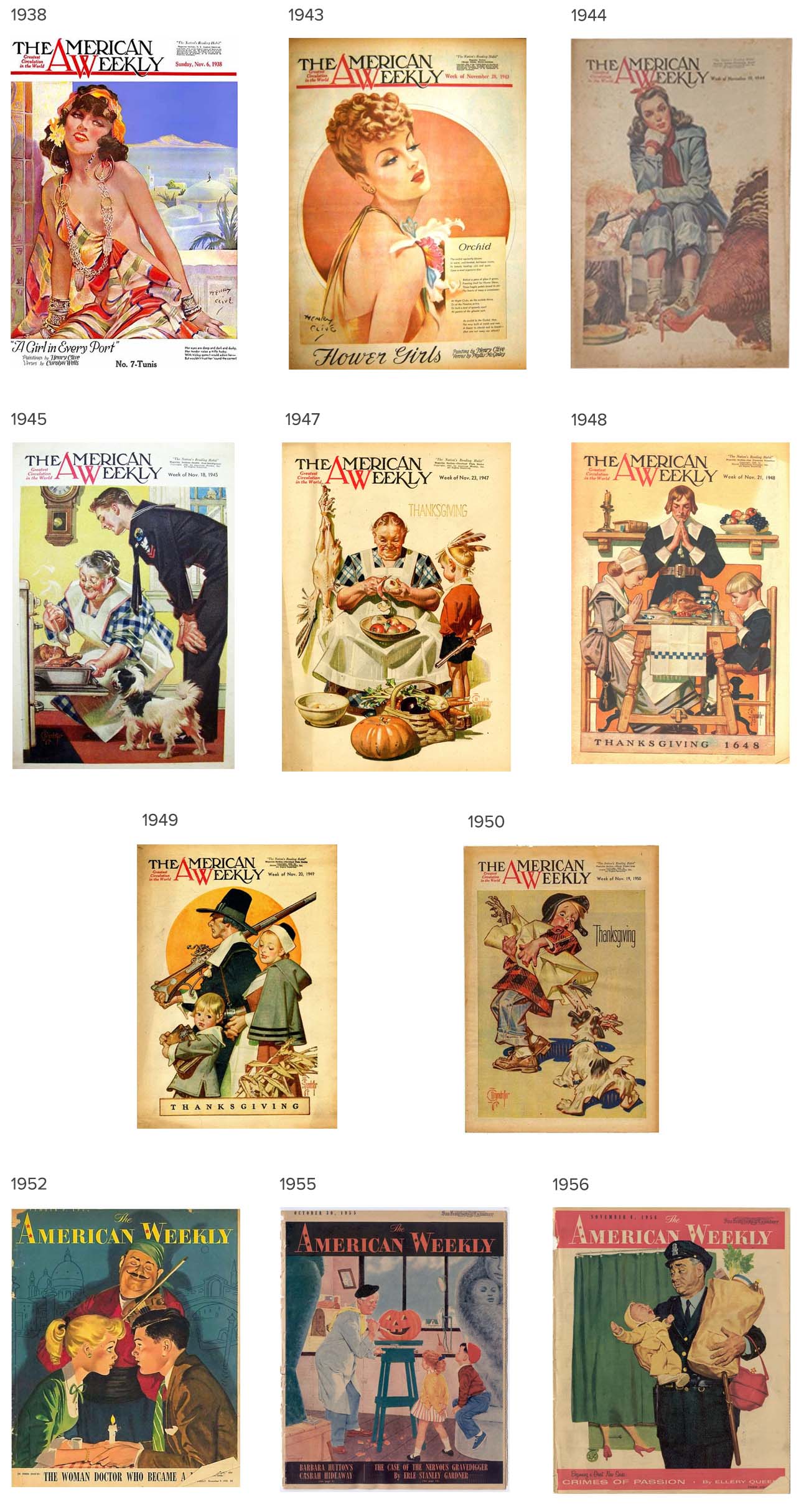 Covers of The American Weekly followed an interesting trajectory during the second world war and post-war period. In November issues between 1939–1943, women were depicted in aspirational and exotic settings of opulence and travel.

Following the United States’ entry into the war, the representation changes — first reflecting the need for women’s hands-on involvement in the war effort (see 1944), and then, starkly, a return to matronly images of women once the soldiers return (1945, 1947).

After that, we see a reversion to traditional images of Thanksgiving (1948, 1949, 1950), before shifting again towards depictions of emerging social norms from the 1950s onwards. For example, a young couple are serenaded on a date in the 1952 cover; and non-conventional male roles are reflected both in 1955 (a flamboyant uncle?) and in 1956 (a man is left holding the baby and the shopping).

Personally speaking, one of the reasons that I find these magazines fascinating is that the graphics were probably not created with posterity in mind.

Designers today know that much of the work they undertake is not “forever”, but is rather being created to solve a present problem, and to be used for a few weeks, months, or years. The primary purpose of each of these covers was to sell the magazine that month, that year.

By creating something so uncompromisingly current, the designers and artists who worked on Good Housekeeping, The Saturday Evening Post, and The American Weekly unwittingly disclosed fundamental aspects of the culture in which they worked.

Fascinated by visual design? Our 4-week Design 101 course will teach you the basics. Find out more!