As the Picasso Cohort of UX Academy get started this month, we thought we’d take a closer look at the story of Pablo Picasso’s life and work, and pay tribute to his extraordinary range of talents.

Primarily famous as a painter and sculptor, he also left a lesser-known body of work as an illustrator, graphic designer, and political activist. In this piece, we briefly tell the story of Picasso’s career, present a showcase of some of his book illustrations and poster designs, and provide a heap of links to more of this great artist’s prolific output.

The story of Pablo Picasso

Pablo Ruiz Picasso was born on 25 October 1881 in Málaga, southern Spain. Even as an infant, his artistic flair was clear: in their book Picasso: Master of the New, Marie-Laure Bernadac and Paule du Bouchet report that Pablo’s first syllable was “Piz!”, as in “Lapiz!”, or “Pencil!”

His father, Don José Ruiz Blasco, was a professional artist. He would let the young Pablo help with his work, initially by getting him to finish the feet on his paintings of birds. Bernadac & Bouchet also recount the apocryphal tale of how Don José vowed to give up his day job once he had recognised the extent of his son’s talents:

One evening Don José left his son a huge still life to complete. Upon his return, he found the pigeons perfectly finished, their legs so lifelike that Don José, deeply moved, brusquely handed Pablo his brushes, palette and paints, telling himself that the talent of his son was greater than his own, and that from that point on he would no longer make art. (Picasso: Master of the New, p. 19)

In fact, his father continued painting, but we can readily imagine the pride and joy that Pablo’s family must have experienced as they and others began to recognize his prodigious talent.

As a teenager, Picasso sailed through every formal test of artistic ability. At the age of 14, he took the entrance exam to Barcelona’s Academy of Fine Arts, known as La Lonja—whereupon he completed a month’s work in a day. Within a couple of years, he was admitted to the Royal Academy of San Fernando in Madrid, amid similar industry and acclaim. The Academy’s formal educational structure, however, did not suit Picasso’s restless nature, and he soon stopped attending classes.

As a young adult, Picasso flitted between Paris and Barcelona, moving between the two great cities no fewer than eight times between 1900 and 1904. He also endured significant poverty during his early years in France, perhaps the most extreme period of which came in 1902-3, when he shared a single room with his friend Max Jacob. The pair worked different hours, and slept in in shifts; they even shared a top hat.

Initially uncomfortable with selling his own work, by 1909 Picasso had struck up a professional relationship with the art dealer Daniel-Henry Kahnweiler. Picasso was now selling quite a lot of canvases, and hardship was becoming an increasingly faint memory.

Artistically, he had by this point moved through a number of personal stages, including his famous “Blue” and “Rose” periods, which are distinguished by their very restricted color palettes. As the result of a period of interest in the angular abstractions of African art, Picasso also effectively inaugurated the Cubist movement with his controversial 1907 painting Les Demoiselles d’Avignon. 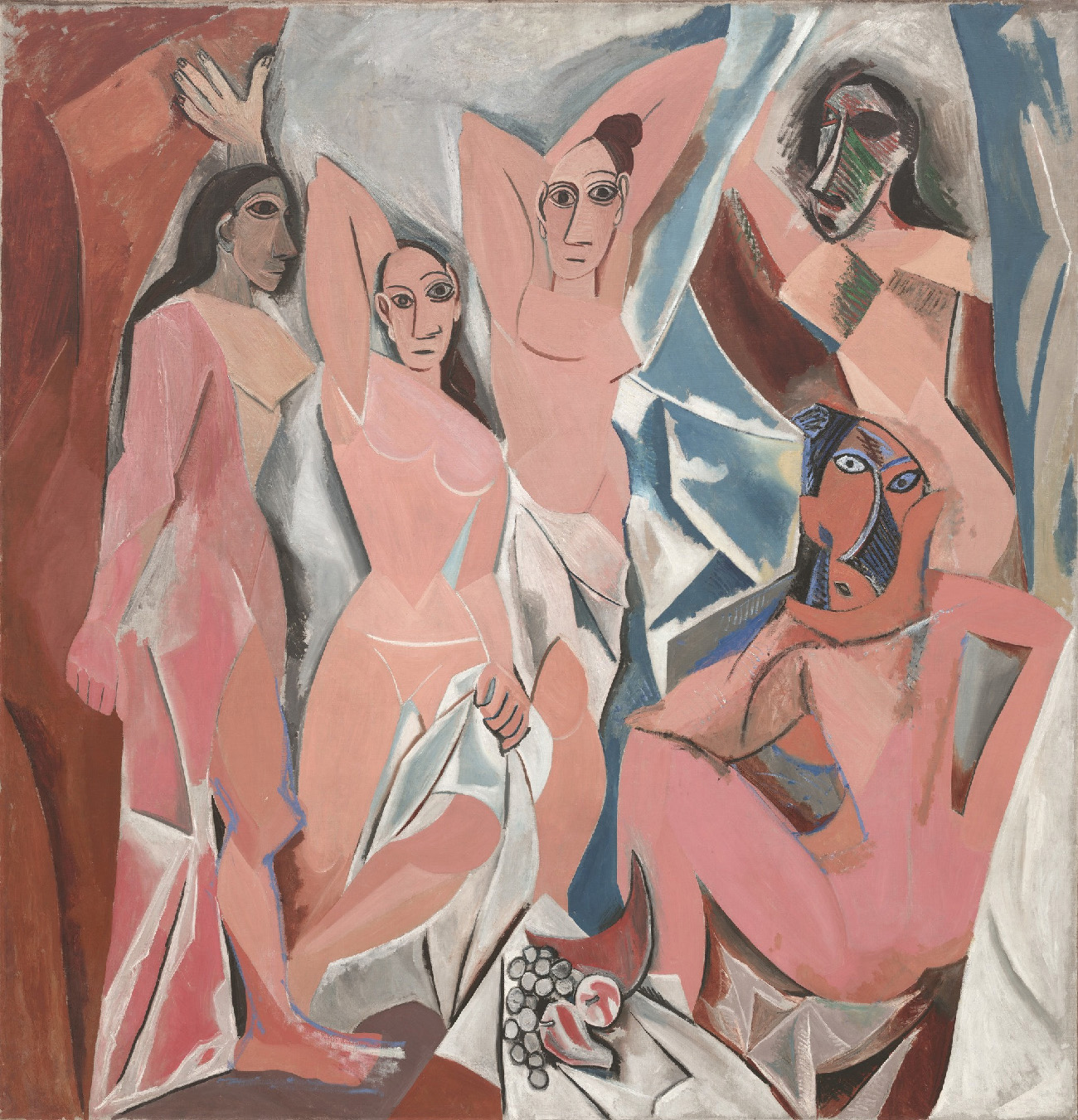 In the decades that followed, Picasso moved through a number of Cubist styles, before returning to work that was more realist and, later, to some extent becoming a peripheral figure in the Surrealist movement. He also became a prolific sculptor, creating an estimated 4,000 sculptures and ceramics during his career.

Picasso as artist of the now

To understand why Picasso so readily turned his hand to illustration and graphic design work, we can perhaps note two themes that emerge from the long and complex story of his life.

The first is that his work was firmly rooted in the “now”. Picasso hardly ever accepted commissions for painting, possibly feeling that painting-to-order would disrupt the natural flow and development of his own artistic ideas. The result is that his canvases bear witness to what is happening in that moment, whether in his personal relationships, or in politics and international affairs.

Many of his portraits are inspired by his friends and love interests at the time; he was known to make hundreds of pictures of the same woman. Around 1912, he even went through a period of writing “I love Eva” on his canvases.

Incredibly, one of his most famous paintings, Guernica, was completed just 3 or 4 weeks following the 1937 aerial bombing of the Basque town by an alliance of Fascist forces. The enormous work—it measured over 25 feet by 11 feet—was an artistic convulsion that publicised, illustrated, and decried a terrible war crime in real time.

Even works that don’t have such a factual subject nevertheless convey the “now” by embodying Picasso’s rapidly shifting aesthetic interests. Although the subject of Les Demoiselles d’Avignon (see above) is imagined, the work nevertheless attests to Picasso’s obsession with African art at the time. He once summed up this neophilic attitude: “I am always doing that which I can not do, in order that I may learn how to do it”.

Illustrators in particular must respond to the now: they are often called upon to complete briefs at short notice, again almost in real time. For example, illustrators often depict or respond to an event being reported in the next day’s newspaper. Illustration does not set its sights on posterity, but rather says something about what is happening today. Even book illustrations must place themselves into the reader’s “now”—their absorption in a narrative—to be successful.

Given this, it is perhaps possible to understand both how Picasso’s talents were so readily turned to the discipline of illustration, and why that kind of work may have appealed to him.

Picasso as artist of the real

The second theme that emerges is that Picasso’s works consistently demonstrate a balance of abstraction and realism. He expressed his dilemma as a portrait painter: “Are we to paint what’s on the face, what’s inside the face, or what’s behind it?”

His work never became “purely” abstract or conceptual: even when his portraits are very abstract in appearance, like the 1937 Weeping Woman With Handkerchief, they still have a clear subject whose essence the painting represents. Compare this approach with that of, say, his Russian contemporary Kazimir Malevich, whose 1915 work Black Square sought to accomplish “non-objective creation”—trying to put the work of art at a total remove from representation of the objective world. 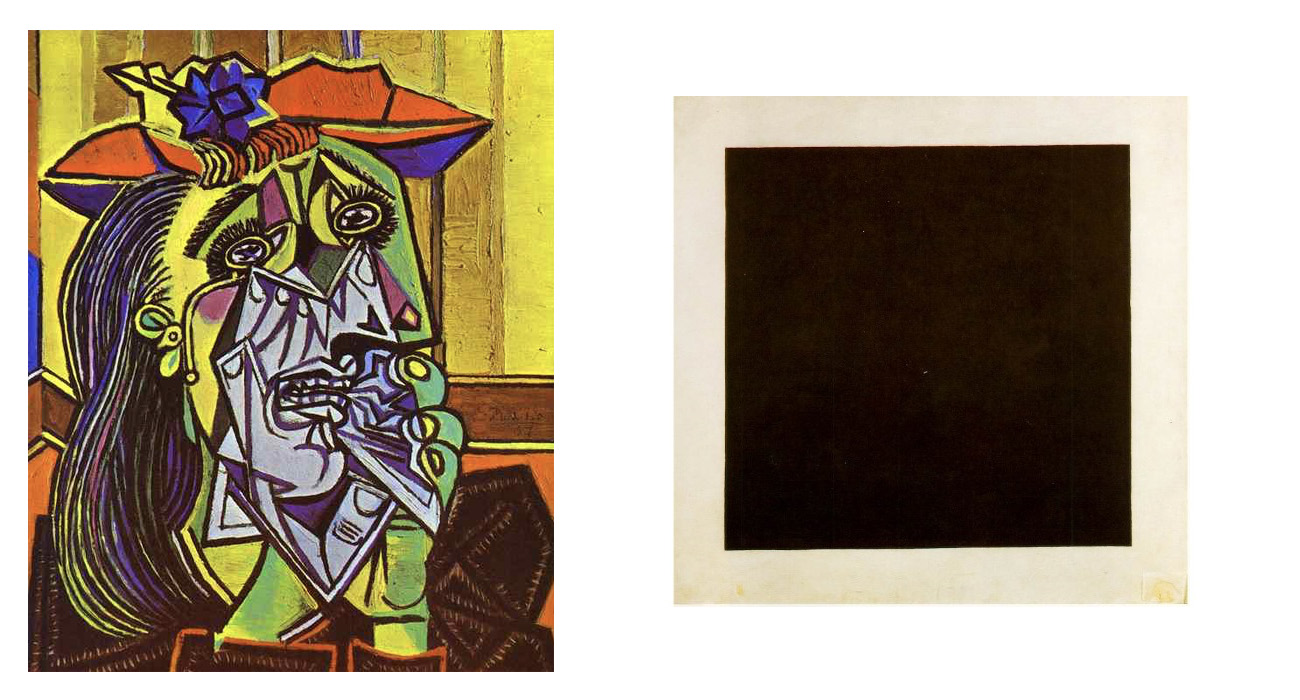 This balance of abstraction and realism, which characterizes so much of Picasso’s output, is crucial in the work of illustrators and graphic designers. Indeed, as an audience, much of what we enjoy in good graphics derives from this play of real and abstract. What’s more, while learning how to abstract is extremely difficult and time-consuming, once it is learned, an abstract approach to graphics can allow the designer or illustrator to complete projects very quickly and efficiently: to say more with less. 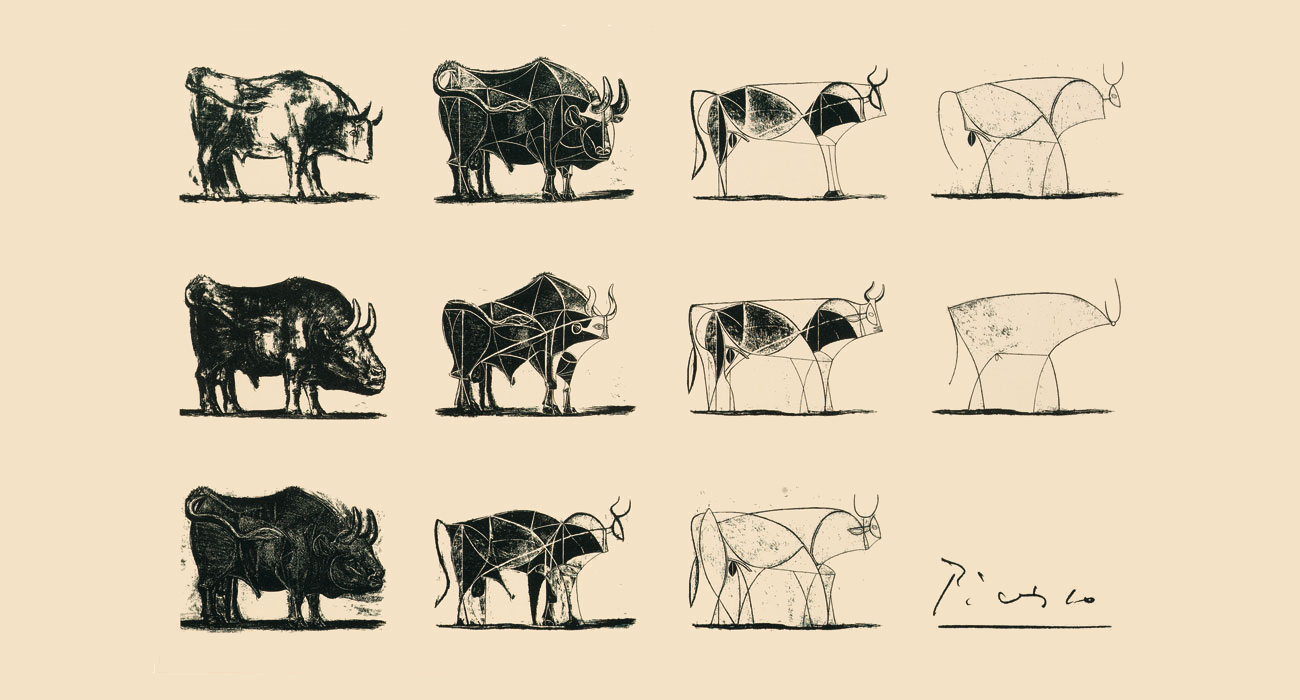 In this study of a bull, Picasso demonstrates the reasoning behind his abstractions. It looks so simple, but he accomplishes the task with a level of intuition, balance, and beauty that most artists can only dream of.

This method of abstraction—boiling something down to its essential structure—is also part of every good design process. In fact, Apple even use Picasso’s Bull to teach their trainees about product design.

We could think of Picasso’s bull as having an affinity with the design process in the following way: first, we start with a design problem (the bull); next, we analyse the problem (draw lines on the bull that trace its key contours); devise possible solutions (first abstractions); and then test and iterate (further abstractions); before arriving at a final, optimized product. At this final stage, everything that would clutter or obstruct the experience has (ideally) been cleared away.

These two themes—working in the now, and abstracting from the real—are evident in so much of Picasso’s own illustration and design work. We’ve put together a short showcase below. If you’d like to see more, just follow the links to discover more great resources. 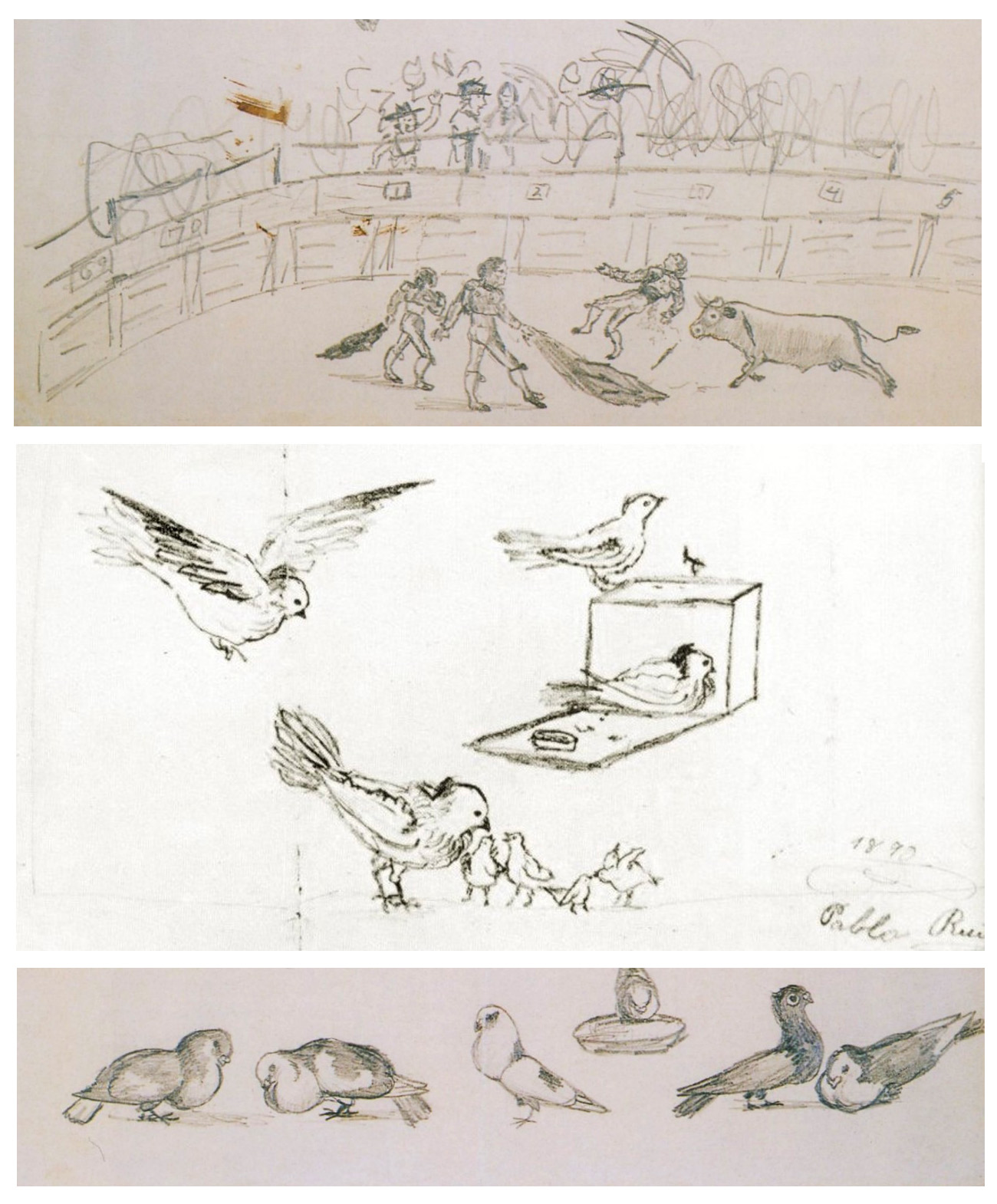 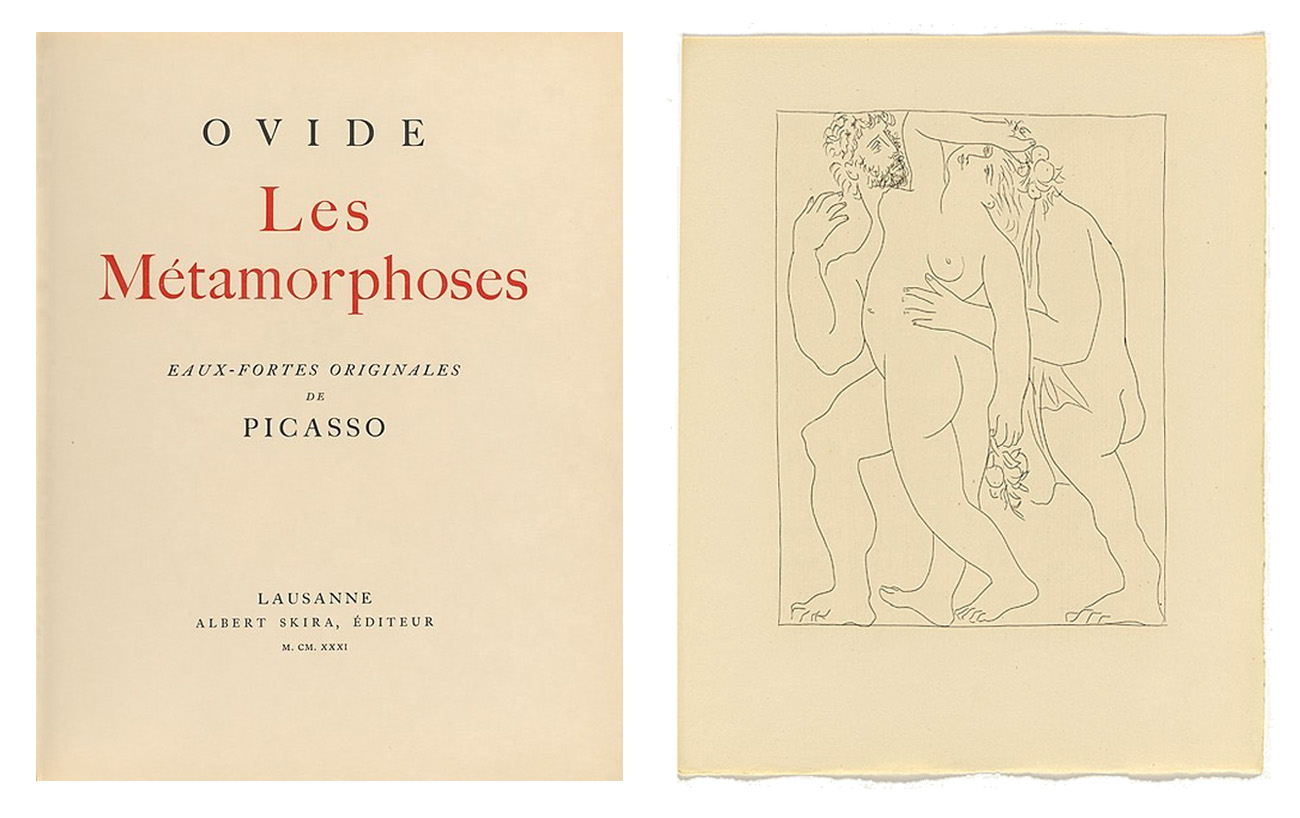 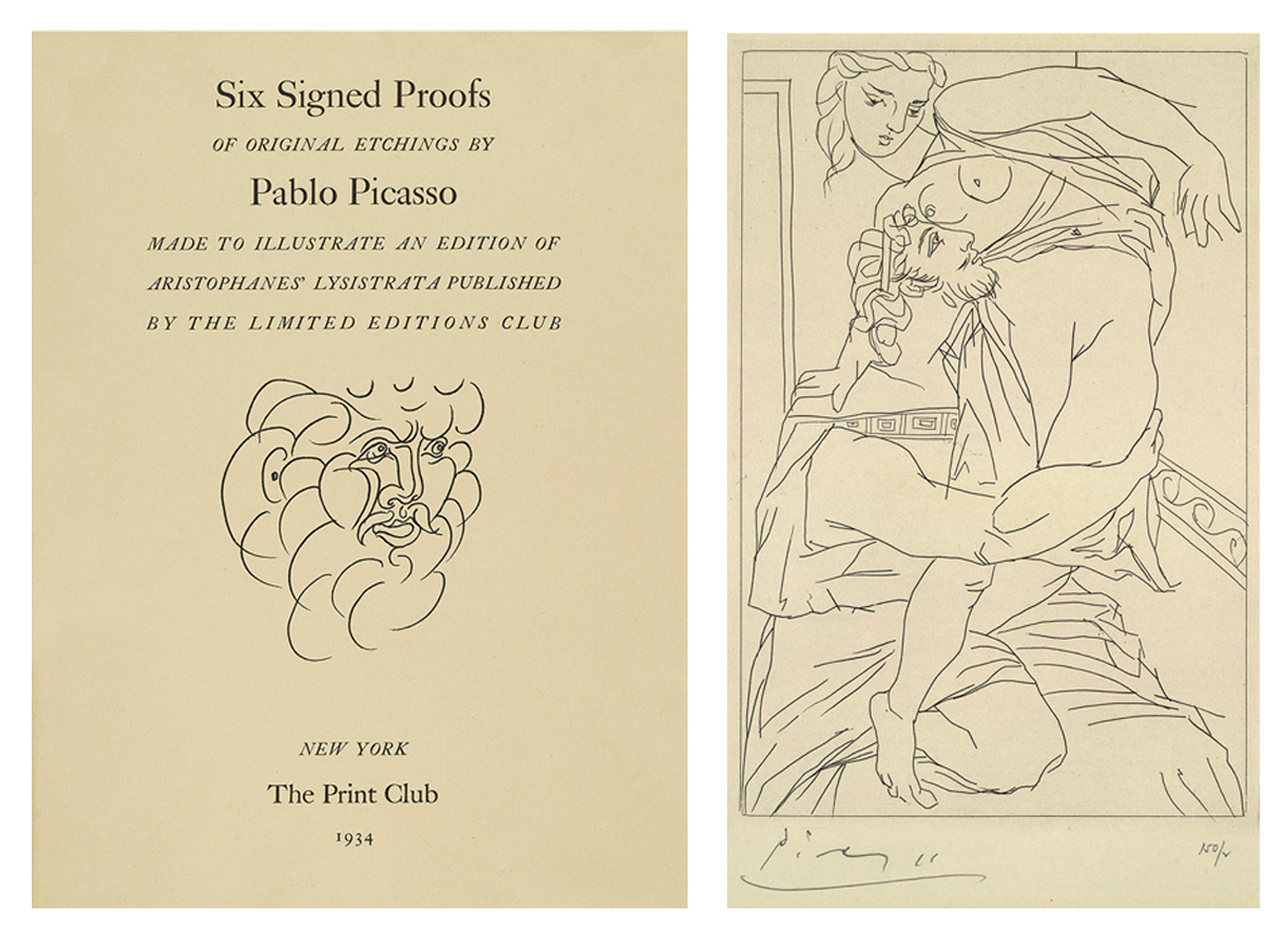 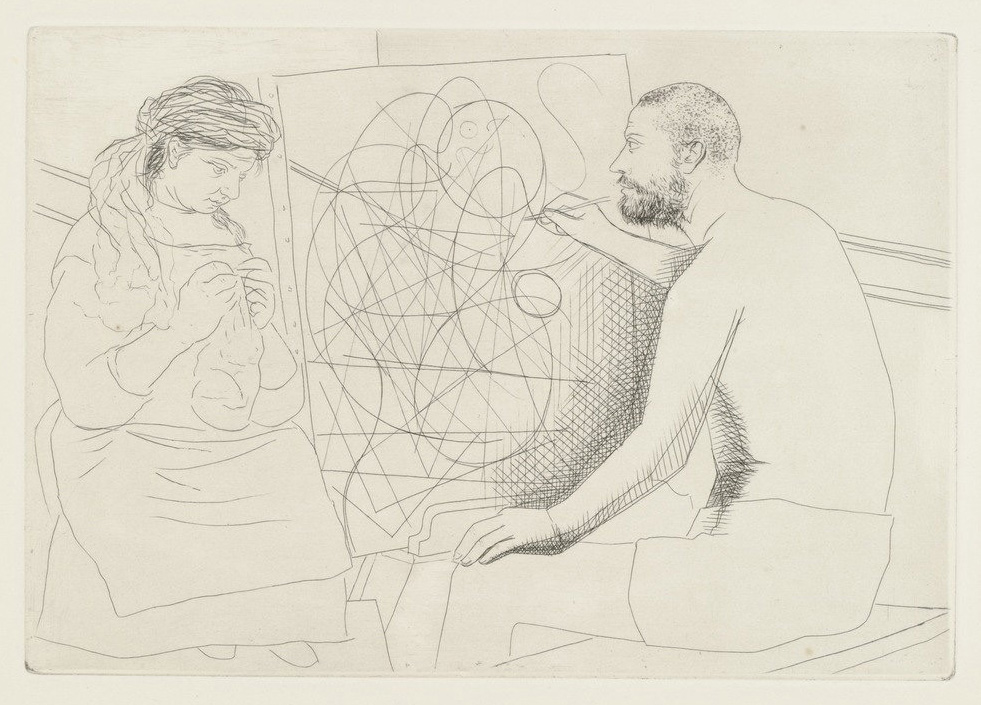 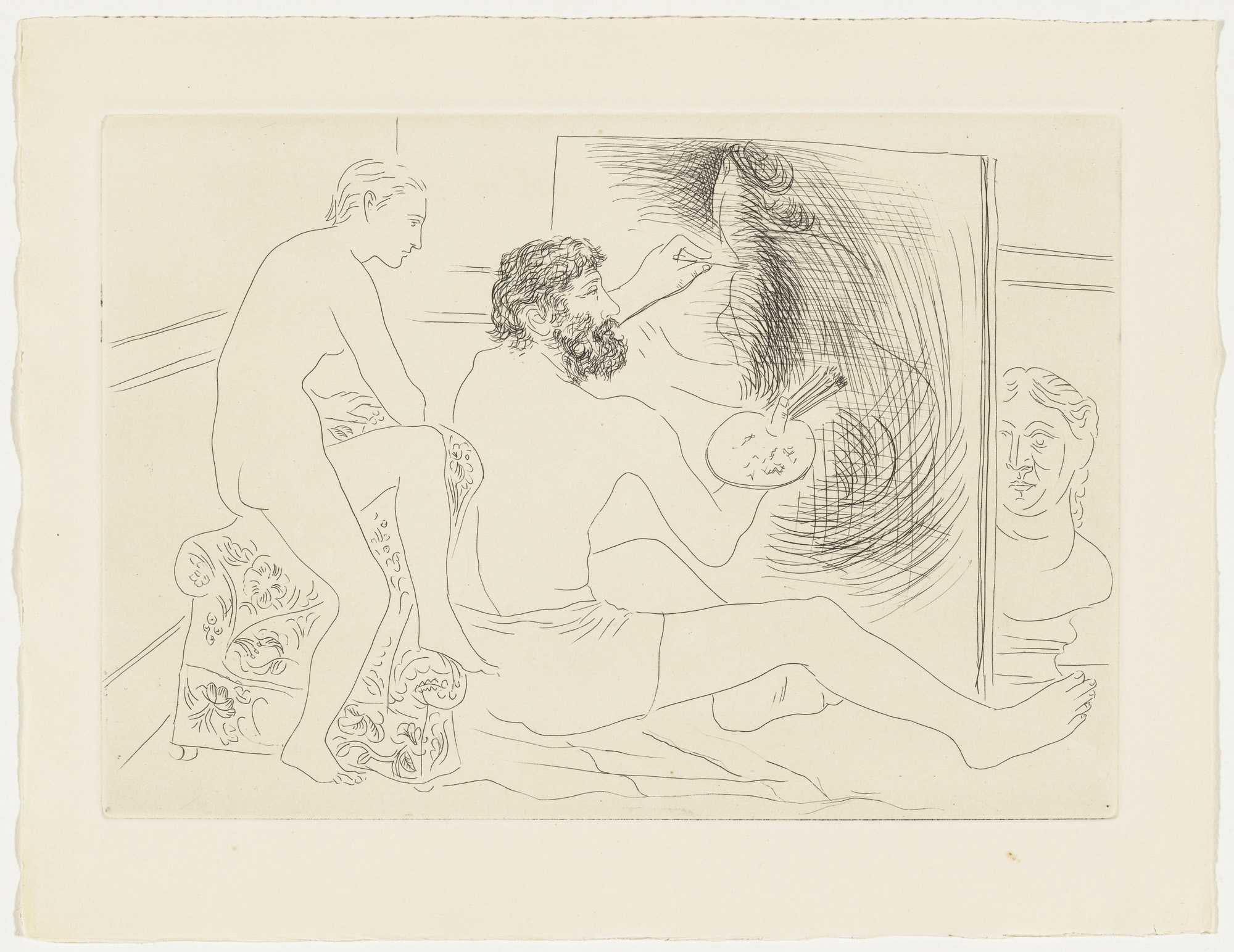 Once, animated by an interviewer’s question about the relationship between art and politics, he scribbled down an impromptu manifesto:

What do you think an artist is? An imbecile who only has eyes if he’s a painter, ears if he’s a musician, or a lyre in every chamber of his heart if he’s a poet—or even, if he’s a boxer, only some muscles? Quite the contrary, he is at the same time a political being constantly alert to the horrifying, passionate or pleasing events in the world, shaping himself completely in their image. How is it possible to be uninterested in other men and by virtue of what cold nonchalance can you detach yourself from the life that they supply so copiously? No, painting is not made to decorate apartments. It’s an offensive and defensive weapon against the enemy.

As well as his famous oil painting Guernica, discussed earlier, Picasso produced other political works. The composition of one of them, The Dream and Lie of Franco, was in fact interrupted by the Guernica massacre and the artist’s response to it. He completed it some months later—an interval that was itself explored in an exhibition at Meadows Museum, Dallas, earlier in 2017. 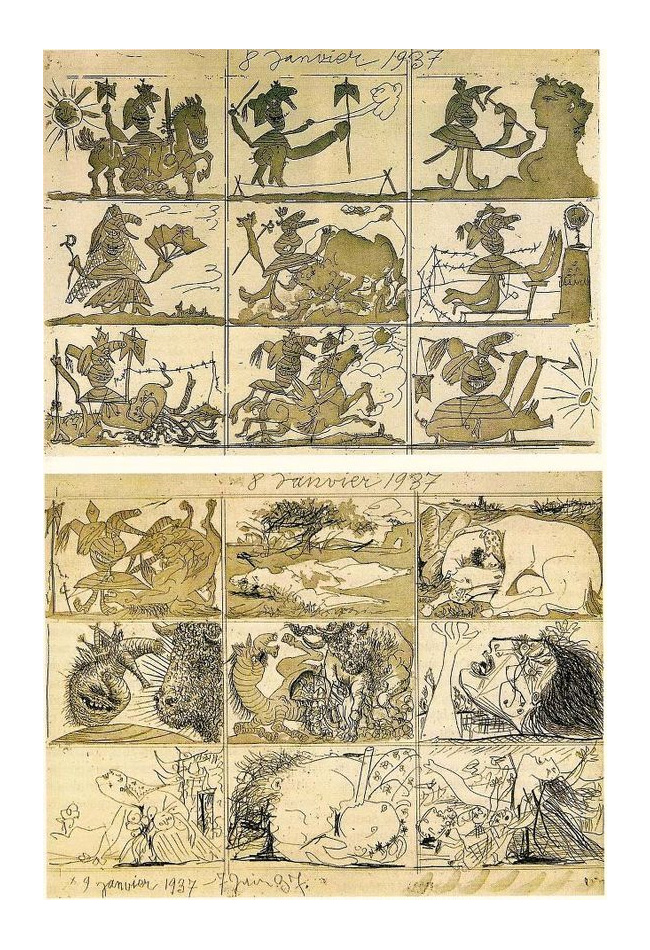 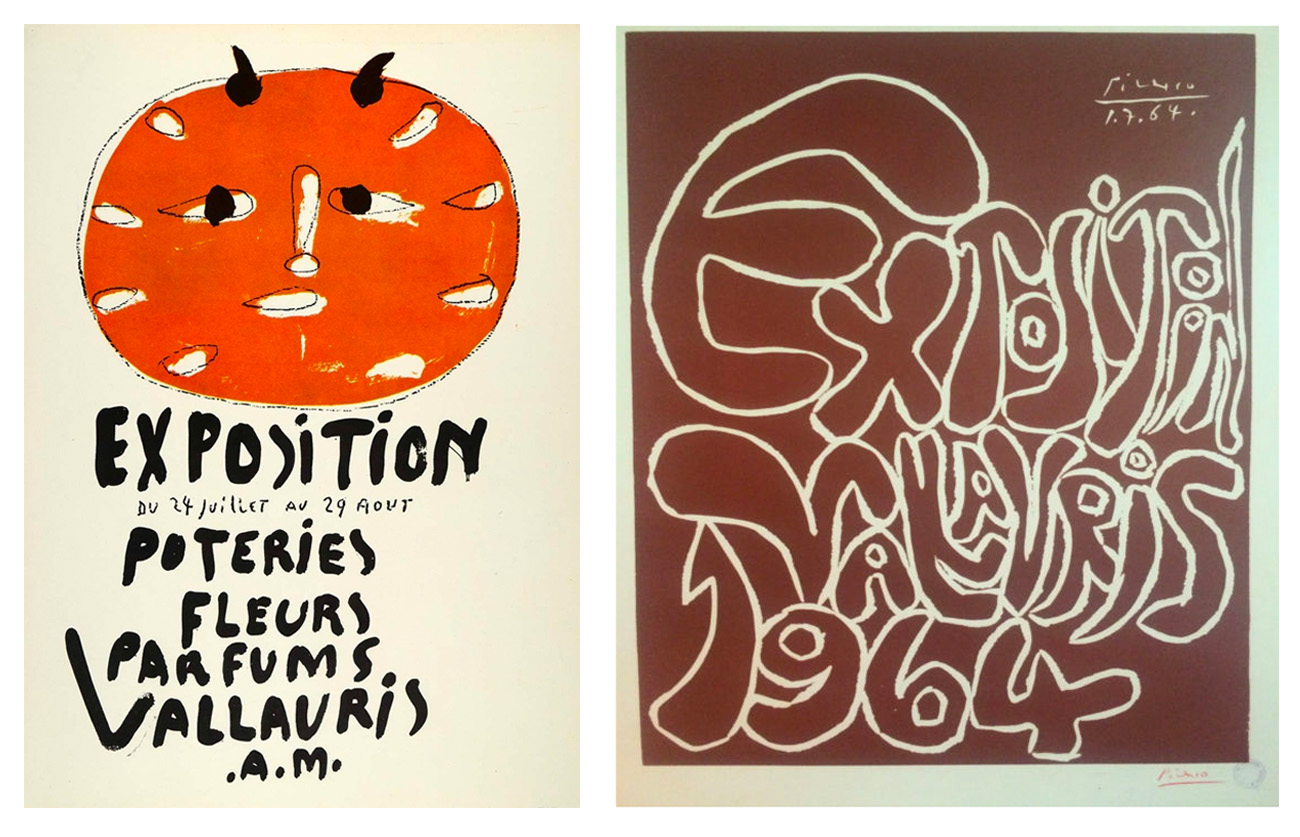 Posters for the peace movement 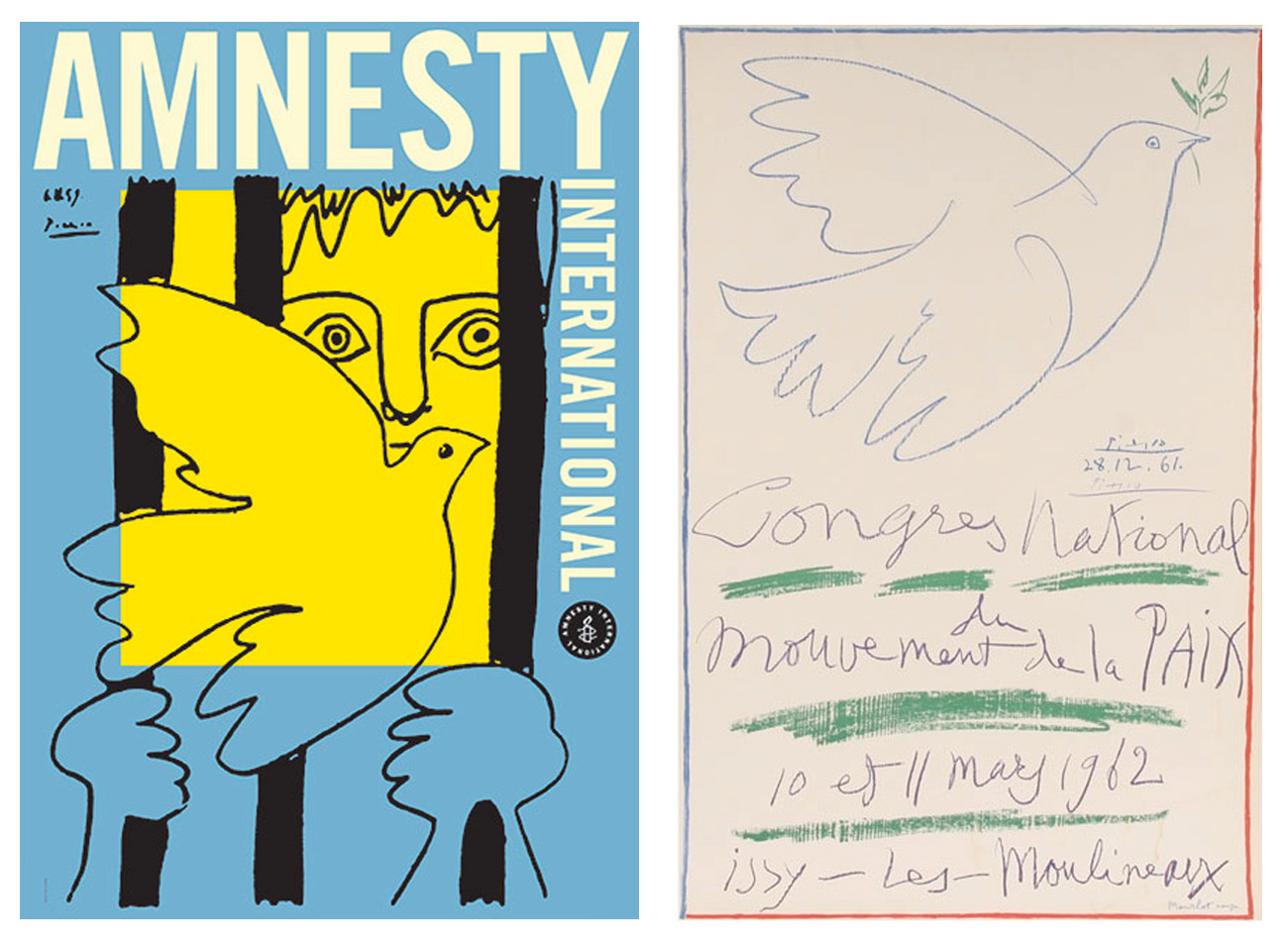 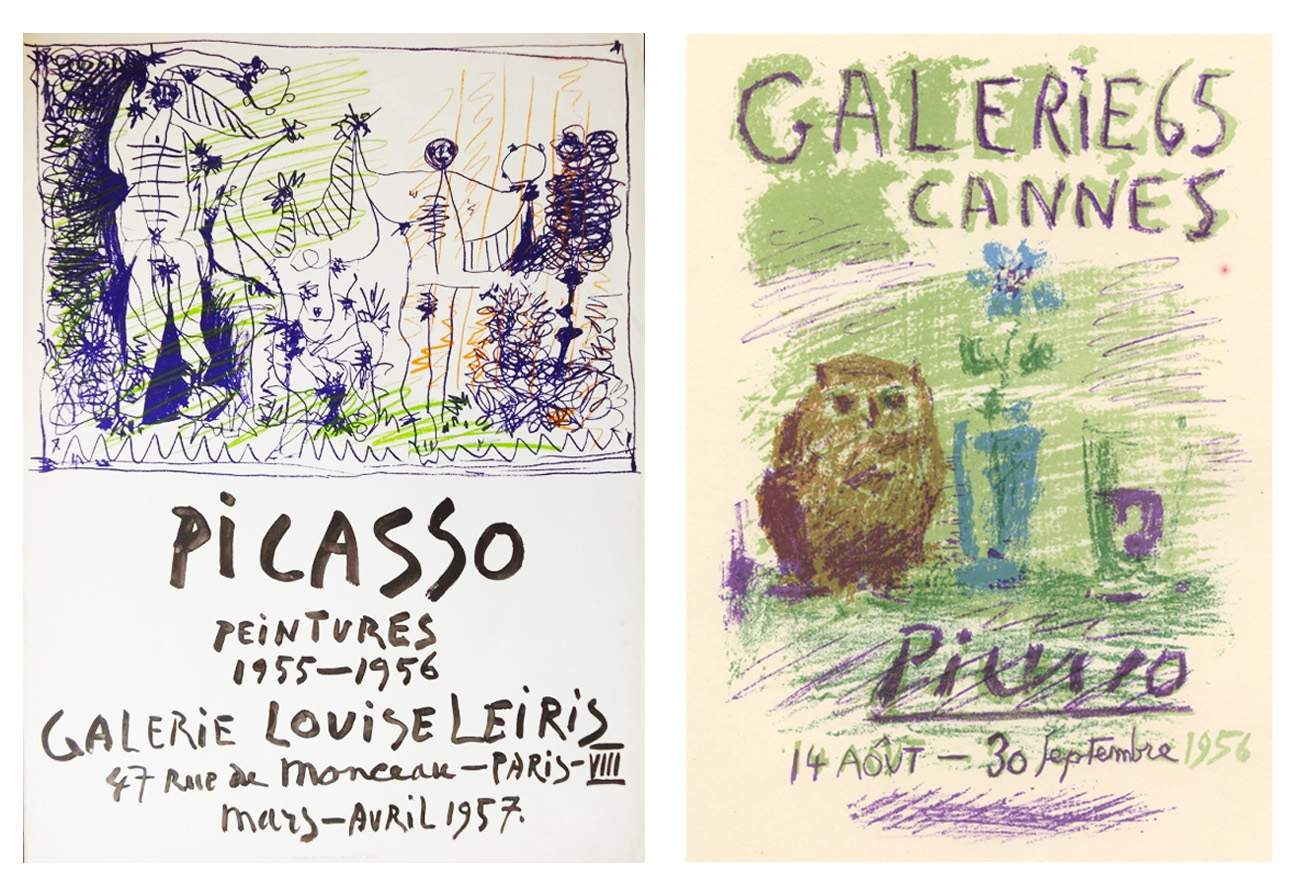 We recently launched a major update of UX Academy, including a curriculum revamp, Group Crits, and Career Services. Check out the new landing page to find out more about the program, including admission criteria and details of our unique tuition reimbursement guarantee!