The holiday season is traditionally a time to give and receive gifts. But what are the origins of this custom, and why do we observe it?

In this article, we’re going to take a look at the cultural significance of the gift, and explore how creative vocations, including design, are wrapped up in the gift economy.

1. Why do we give and receive gifts?

In the west, the tradition of gift-giving around Christmas is sometimes associated with the story of the wise men, who in Christian narratives visited Bethlehem bearing gifts of gold, frankincense and myrrh. But the celebration of Christmas itself incorporated earlier pagan festivities around the winter solstice – something that led Puritans to campaign for an end to Christmas in the mid-1600s.

What’s more, the practice of gift-giving around Christmas has varied significantly between cultures and eras. In Holland, it is traditional to exchange gifts on the eve of St Nicholas (December 6th), with December 25th reserved for eating and spending time with family. Similarly, in Germany, gifts are exchanged on Christmas Eve.

Meanwhile, in England and the USA, it was common to give new year gifts rather than Christmas gifts until the Victorian period, during which festive practices in English-speaking countries absorbed many influences from Germany. This included the custom of getting a Christmas tree, which became popular after an engraving of Queen Victoria and her German husband Albert was published in 1848. It depicted them gathered around a Tannenbaum at Windsor Castle, surrounded by gifts and decorations: 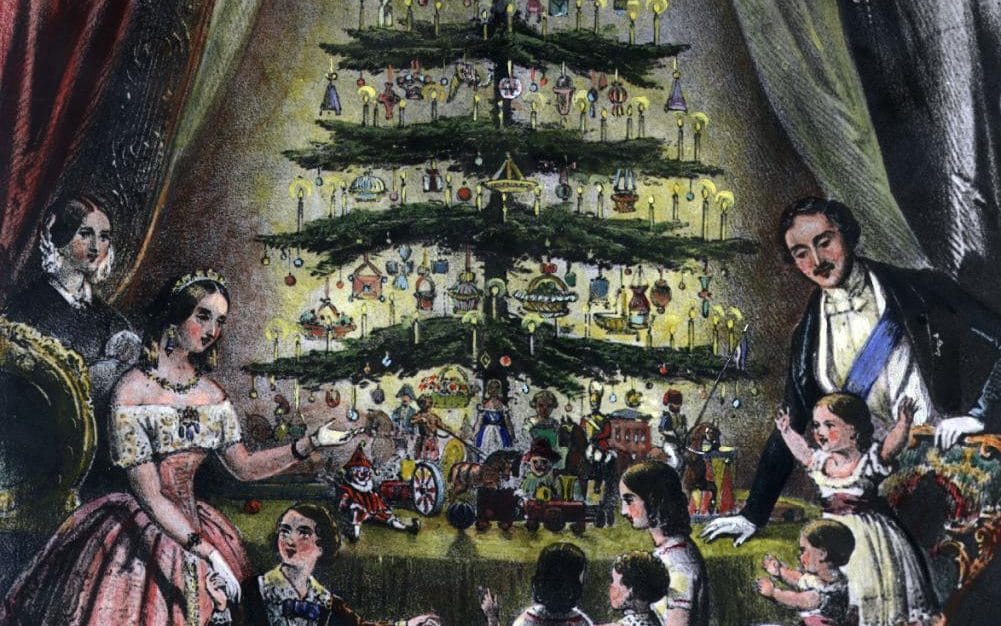 However, the giving and receiving of gifts is common to all cultures and religions. In Japan, gift customs are observed throughout the year. Some are notable for their formality: for example, the ritual exchange of gifts is a customary part of maintaining business relationships. Significantly, the care that is taken in choosing and wrapping the gift is just as important as the gift’s utility or market value.

Finally, gifting even transcends species: the giving of gifts and the sharing of riches is observed in, for example, birds, cats, and bonobos. 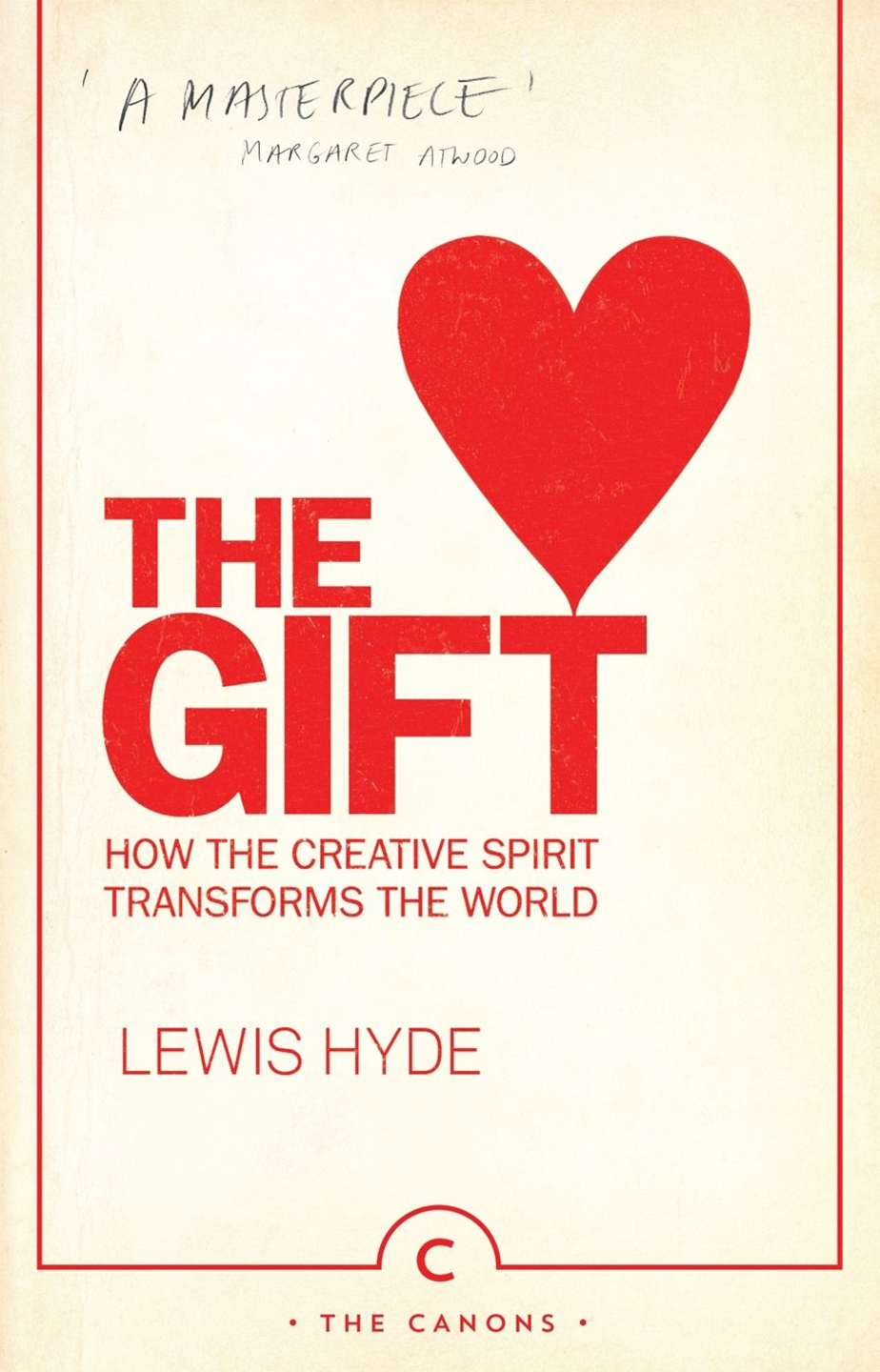 Hyde explains a basic distinction between the sphere of the market (the commodity economy) and the sphere of eros (the gift economy). Commodity exchange in market transactions is associated with work and productivity — with the trading of materially valuable goods at a price. Commercial transactions are negotiated in order to “balance the scale” between buyer and seller, but they usually establish nothing more than an anonymous, utilitarian relationship between them.

By contrast, gifts follow quite a different pattern of exchange. The value of the gift is not commensurate with its market value. Rather, we understand the worth of a gift in terms of the special meanings its transfer embodies. Hyde explains the comical absurdity of these two kinds of exchange becoming confused:

Woody Allen used to tell a joke at the end of his stand-up routine: he would take a watch from his pocket, check the time, and then say, 'It's an old family heirloom. [Pause] My grandfather sold it to me on his deathbed.' (Hyde, The Gift, loc. 931)

Perhaps for this reason, cultural practices of gift-giving are surrounded by (mostly unwritten) social rules. For example, gifts typically can’t be returned immediately; there must first be a passage of time. This protects the gift's status as gift rather than commodity; there is an asymmetry to the act of giving that distinguishes it from the mutuality of a market transaction.

We experience this need for an interval between the giving and receiving of gifts in more everyday gift exchanges, too. If someone visits and gives me a nice bottle of wine, I might feel an immediate sense of imbalance. But this imbalance mustn’t be corrected there and then. I could take another bottle off my wine rack and give it straight back to my friend; but this probably wouldn’t even be interpreted as a gift; more likely, they would read it as a rejection of the spirit (or erotic content) of their gift to me. I can give them another bottle of wine in return, but it must be at a later date, notionally to mark another occasion. The gift’s purpose is symbolic, distinct from its market price; as Marie Kondo says in The Life-Changing Magic of Tidying, “the purpose of a gift is to be received”.

Hyde’s book does tend to convey a negative view of commodity exchange, and the idea that gift exchange has been consumed by commodity exchange in an age of mass production and commercialism is probably exaggerated. In his conclusion, he acknowledges that

[m]y position has changed somewhat. I still believe that the primary commerce of art is a gift exchange, that unless the work is the realization of the artist's gift and unless we, the audience, can feel the gift it carries, there is no art; I still believe that a gift can be destroyed by the marketplace. But I no longer feel the poles of this dichotomy to be so strongly opposed [...] I came to understand that gift exchange and the market need not be wholly separate spheres. (Hyde, The Gift, loc. 5356)

the work [...] separates itself from its author, his intentions, and his possession, and another [person] lays hold of [it]. The labor which brings being into our possession ipso facto relinquishes [possession.] Every will separates itself from its work. [...] The other [person] can dispossess me of my work, take it or buy it, and thus direct my very behavior; I am exposed to instigation. (Levinas, Totality and Infinity, p. 227)

His point is that commerce is an expression of the social relationship, not a subversion of community. Of course, we are always “exposed” to the possibility of exploitation; but society, not exploitation, is the essence of commerce.

What’s more, Levinas emphasises how our wider existence as social animals is characterized by constantly giving and receiving. For example, we give and receive by communicating with one another in language: we literally give one another ideas, and share our worldviews through daily exchanges of conversation. Reaching far beyond the exchange of physical gifts, our lives are shaped by the constant, metaphorical, giving and receiving of social life.

If society is constituted by both a commodity economy and a gift economy, then creative professionals (including designers) have a special role in shaping those gifts. As Hyde puts it, the creative spirit “transforms the world” by taking our environment and investing it with beauty, function and meaning. To finish off this article, I’m going to explore a case study of how the creative spirit transforms the world — Aaron Draplin’s “Free Fridays”. 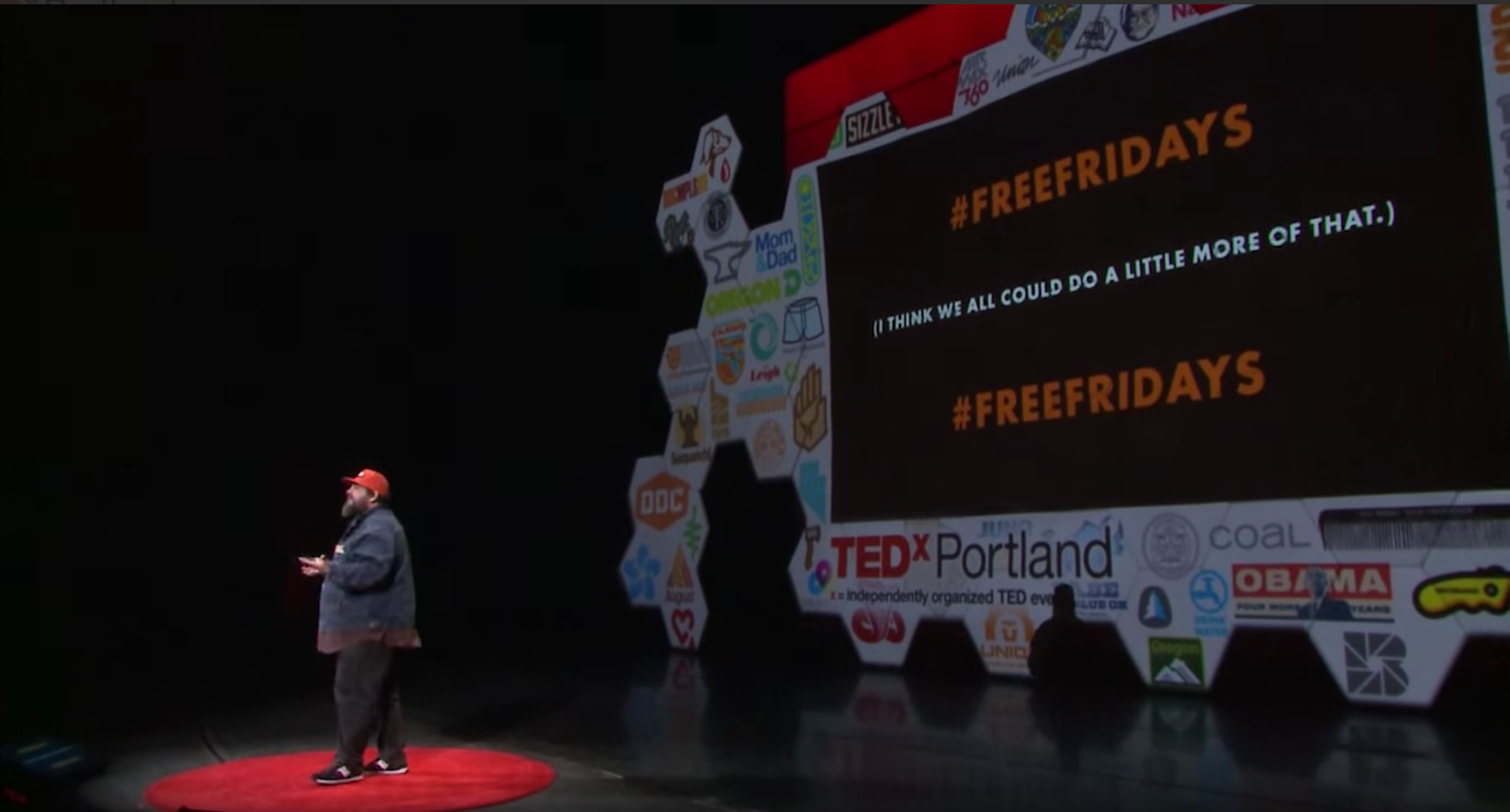 In his entertaining talk “Making it in the little leagues”, designer Aaron Draplin tells the story of his career so far. As well as paying tribute to the gifts he received from family and friends along the way, at the end of his talk, he explains his idea of “Free Fridays” – a few hours spent at the end of each week performing unpaid design work for clients in need of a break:

This is my idea. I work all week long, I work on Saturday & Sunday, I strike when the iron's hot [...] and I’m rewarded with a paycheck. [...] But I'm kind of tired of throwing those hours away – we don't get those back. So... what if we did this thing called Free Fridays? And I use my little mouse finger to help people I don't know. For the next bunch of Fridays, 4-5 hours, [if that was a] $150/hour big studio rate... [after] five years [of Fridays], that's $150,000 I would donate to helping people with stupid little my mouse finger. (Draplin, TEDx Portland 2014)

Throwing hours away for money

There are some interesting things to note about Draplin’s Free Fridays. First is the way that he talks about work. Counterintuitively, he describes his paid work as “throwing hours away” — and presents giving his time away as the antidote. This is reminiscent of Hyde’s description of how the great American artist Edward Hopper worked three or four days a week completing commercial art and illustration work for magazines:

Edward Hopper used to hire himself out as a commercial artist to magazines with names like Hotel Management. Hopper was an expert draftsman, and the illustrations and cover he drew during those years are skillfully rendered. But they are not art. They certainly have none of Hopper's particular gift, none of his insight [...] Hopper's magazine covers – happy couples in yellow sailboats and businessmen strolling the golf links – all have the air of assignments, of work for hire. [...] During his years as a commercial artist, Hopper created for himself what I have called the 'protected gift-sphere' by spending only three or four days a week at the magazines and painting at home the rest of the time. (Hyde, The Gift, loc. 5410)

Gifted work is a labor of love

When designers pursue a project for its own sake rather than for the financial reward it could generate, they are engaged not in “work”, but in what Hyde calls “labor”. Work is what we are paid to do by the hour. Labor, by contrast, is something that we become absorbed by, something during which we don’t track time, something that obsesses us; it is a “labor of love”.

Third, you can tell from how Draplin speaks about his Free Fridays that it has meaning to him. Making a gift of his design talents must in turn tell him something about who he is and who he wants to be as a designer. It also says something about his view of design’s place in the world – of its social and ethical purpose. Making design do good is as important to Draplin as making money. Of gifting, Marcel Mauss wrote (in a book also called The Gift), “To make a gift of something is to make a present of some part of oneself”.

Hyde also quotes Walt Whitman: “the gift is to the giver, and comes back most to him – it cannot fail”. The gift is as much about nourishing the giver as it is about nourishing the receiver: just as giving transforms work into labor and commodity into gift, so the act of giving can re-form the artist or designer and give a fresh perspective on their career, their work, and their purpose.

It’s no coincidence that the labors of human creativity usually end up in museums, available to public view: art reflects, critiques, and dignifies our lives. True art cannot remain the private property of the commodity economy, but must, in Hyde’s term, remain in motion. Relatively few people may be artists, but art’s cultural function is to bear public witness to what it means to be in this place at this moment.

Finally, Draplin’s Free Fridays show how, just as the rituals of gift exchange at Christmas time can reinforce the ties between members of a family or community, and bind them together afresh, so gifting outside that group can create new ties and generate a sense of shared human endeavor and identity. It’s significant that Draplin spontaneously identifies “people I don’t know” as the recipients of his gifts. Gifts, lacking any guarantee or expectation of return, can express peace and goodwill to those far off in a way that a commercial relationship cannot.

More about gifts in contemporary design

There is lots more we could explore about the significance of the gift in contemporary design.

Online and mobile games also borrow the language of gifts, both to offer in-game rewards (“free coins!”) and to attempt to drive greater engagement with the product (“send coins to your Facebook friends!”). Again, on the surface these use the terminology of gifts, but the meanings they carry are ultimately commercial.

Thanks for reading! If you’d like to learn more about gifting, we’ve put together some resources below. Why not let us know what you think in the comments?

Designlab offers both short design courses and an in-depth UX Academy. Click to find out more