Best of the Blog, UX Design

Writing is becoming an increasingly important skill for designers, whether it's creating meaningful copy to use instead of placeholder text, writing on the company blog, or creating snippets of text for use in email campaigns or UI mockups.

The good news is that you’ll be familiar with many of the skills needed for good writing from your work as a designer. In this post our head of content Andrew gives his personal tips on creating blog posts and long-form articles.

1. Work out who your audience is

As with designing, our first step in any project should be to understand the user – in this case, the people who will be reading what we write. Most of the time, we know our audience before we choose our topic. It can be helpful to define that audience with as much clarity as possible, as that helps guide what we write about, how we write, and how much detail to include.

For example, here at Designlab our content is aimed at a number of audience personas, including upskillers, career switchers, and industry professionals. Some of our pieces are aimed primarily at just one of these audiences, while others just focus on a sub-section of one of these groups. Where your writing is aimed at a more specific group, it’s even more important to ensure that the content and style has been thought through, and truly tailored to their needs.

2. Pick a topic that connects with your reader

However amazing your technique, it’s going to be difficult to write well if you don’t have something to write about that’s compelling for your audience – and (ideally) for you as a writer. If you’re struggling to come up with topic ideas, this is where identifying your types of audience can help. For example, when we’re writing content for career switchers at Designlab, we need to step into our audience’s shoes, and understand what topics are important and interesting to them.

Chances are that career switchers reading our content are at the beginning of their journey into the design profession, so important topics for them will include practical advice, inspiring stories, as well as interesting insight into what designers do. Your audience will be different from ours – whoever you’re writing for, make sure that the topics you choose are based on their needs. 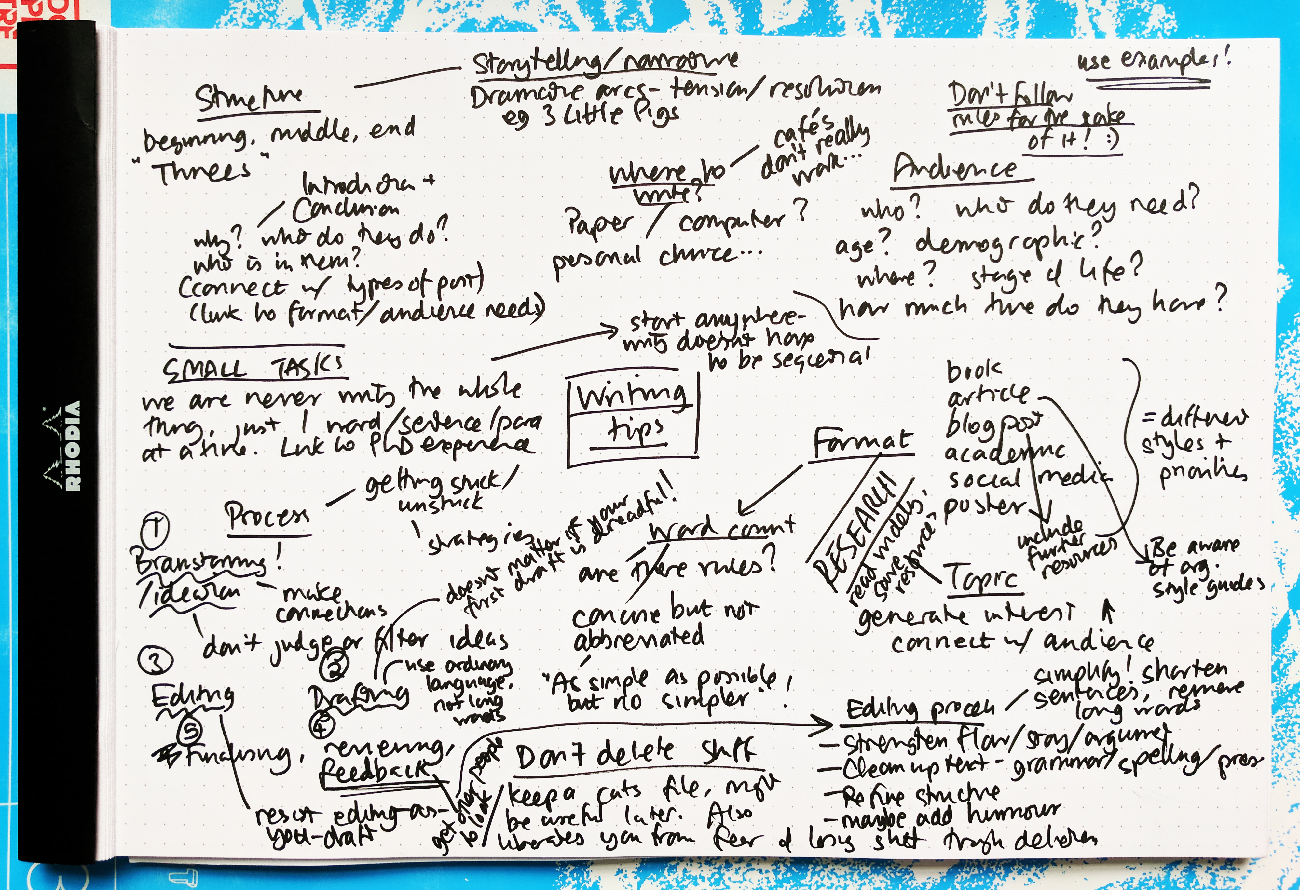 3. Brainstorm and research your topic

This doesn’t work for everyone, but once I’ve chosen a topic, I usually find it helpful to get a large, blank piece of paper, and just write down in a kind of “cloud” format all the relevant themes and ideas I can think of. Try to keep going until you can’t think of anything else to add. If you think better with a keyboard, just open up a text file or Google Doc and start listing off your ideas. You can then start to draw connections between themes, which begins to lead us towards a structure. If you get stuck, go through the ideas you've already noted down, and try to expand each one.

Once you’ve brainstormed, it’s time to research – gather all the books you have on what you want to write about, get Googling, and put together a folder of resources and links that will initially guide your writing, but might eventually become a bibliography or “further reading” section for your text. (Remember never to plagiarize – if you quote or significantly paraphrase someone else's work, make sure to acknowledge the original source.)

The majority of spoken or written human communication is storytelling in some sense. Our oldest texts, like religious scriptures, emerged out of an “oral tradition” – the practice of re-telling stories from one generation to the next. Humans are highly social creatures, and stories are how we share information and convey meaning. Even the most basic language-acts, like naming (“that is a tree”) or attributing (“that tree is green”) are micro-narratives, which communicate information by telling a story about the things that make up our world.

If we think of the forms of narrative we’re most familiar with – like children’s books, novels, news reports, opinion pieces – what they all have in common is an arc of tension and resolution. In complex texts, there might be many of these arcs that criss-cross one another.

For an example of how tension and resolution work in narratives, let’s take James Orchard Halliwell’s version of the traditional story The Three Little Pigs. (I've abridged the story below, but follow the link to check out the original text.) 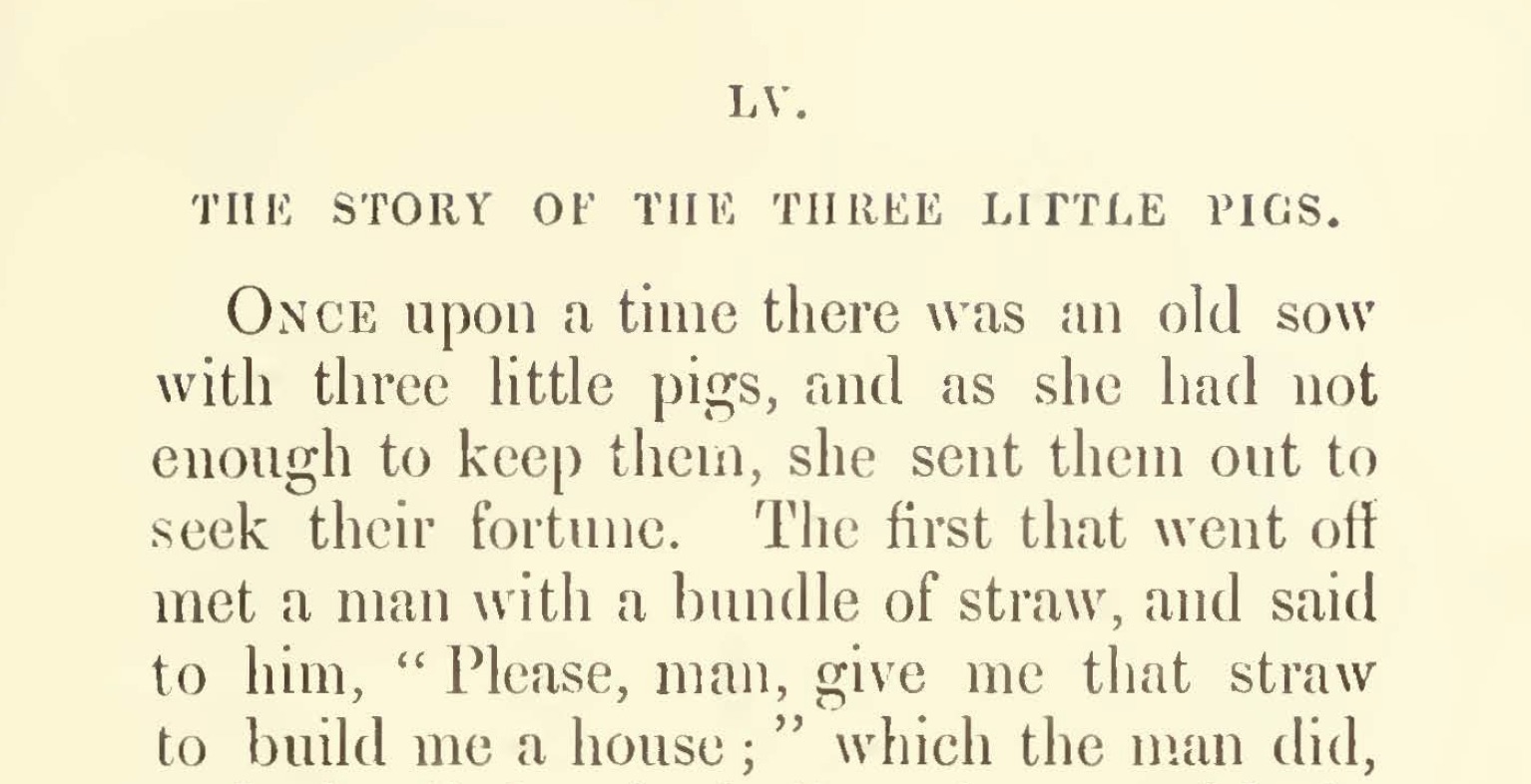 5. Use a structure as a guide

As well as showing the effectiveness of narrative arcs of tension and resolution, the story of the three little pigs also shows the importance of structure:

1. Beginning
Introduction of characters (the three pigs, the people in the forest, the big bad wolf); introduction of a point of conflict that provides dramatic content (little vs big; pigs vs wolf).

With this structure in mind, when you begin writing, set out a notional template for your article. It doesn’t matter if you end up moving away from it in the course of writing. The important thing is that you’ve begun with some organizing principles. I often start with something like this:

Even if these headings and target word counts are completely arbitrary at the start of the process, they do at least give you some constraints within which to start working. For example, working with this template will force you to consider: what are the three most important points I want to address in this article?

6. Use a clear introduction and conclusion

As we saw above, a good introduction creates expectation and tension, and makes the reader want to keep reading. Most of the time, an introduction needs to:

Apple today announced the latest iteration of the iPhone – the iPhone X. Alongside the usual incremental improvements that most of us are now largely indifferent to, the arrival of iOS 11 does deliver something more significant: a mainstream, mass-market mobile product that for the first time has an Augmented Reality (AR) engine baked right into the OS.

Read on for an explanation of what AR is, and a look at its current and potential future applications. We also explore what AR could mean for UX designers, and, finally, our take on the $162bn question: are people going to use it?

A good central section is firmly connected to the themes and tone of the introduction, and unfolds a story or delivers information in a connected and structured way (even if that structure is simply a list, as in this article).

A good conclusion resolves the tension created in the introduction. Depending on the kind of text, a conclusion might include:

7. Make it as short as possible, but no shorter

There is a big difference between listening to someone speak, and reading what someone has written. When we’re in a room listening to someone, we usually can’t control how quickly they are talking, and we can’t go back and listen again to the last thing they said. For that reason, good presentations and speeches often include plenty of “redundancy” – basically, that means repeating the same point several times using different words. It helps ensure that the audience will receive and understand the message.

When we’re writing, redundancy is much less important, because people can always go back and re-read a sentence or a whole section.* In fact, redundancy is usually to be avoided, both because it adds unnecessary length, and because it can make it harder for the reader to follow the logical progress from one point to the next.

(*For example, we could remove redundancy from this sentence: “In writing, redundancy is less important, because people can re-read a sentence or section.”)

People sometimes ask if there is an ideal word count for blog articles. The basic answer is no. There’s a famous quotation attributed to Albert Einstein: “Everything must be made as simple as possible, but no simpler.” This paradox expresses a truth about writing, too: clear communication relies on a text being as concise as it can be, but not so abbreviated that it doesn’t properly explain its points. 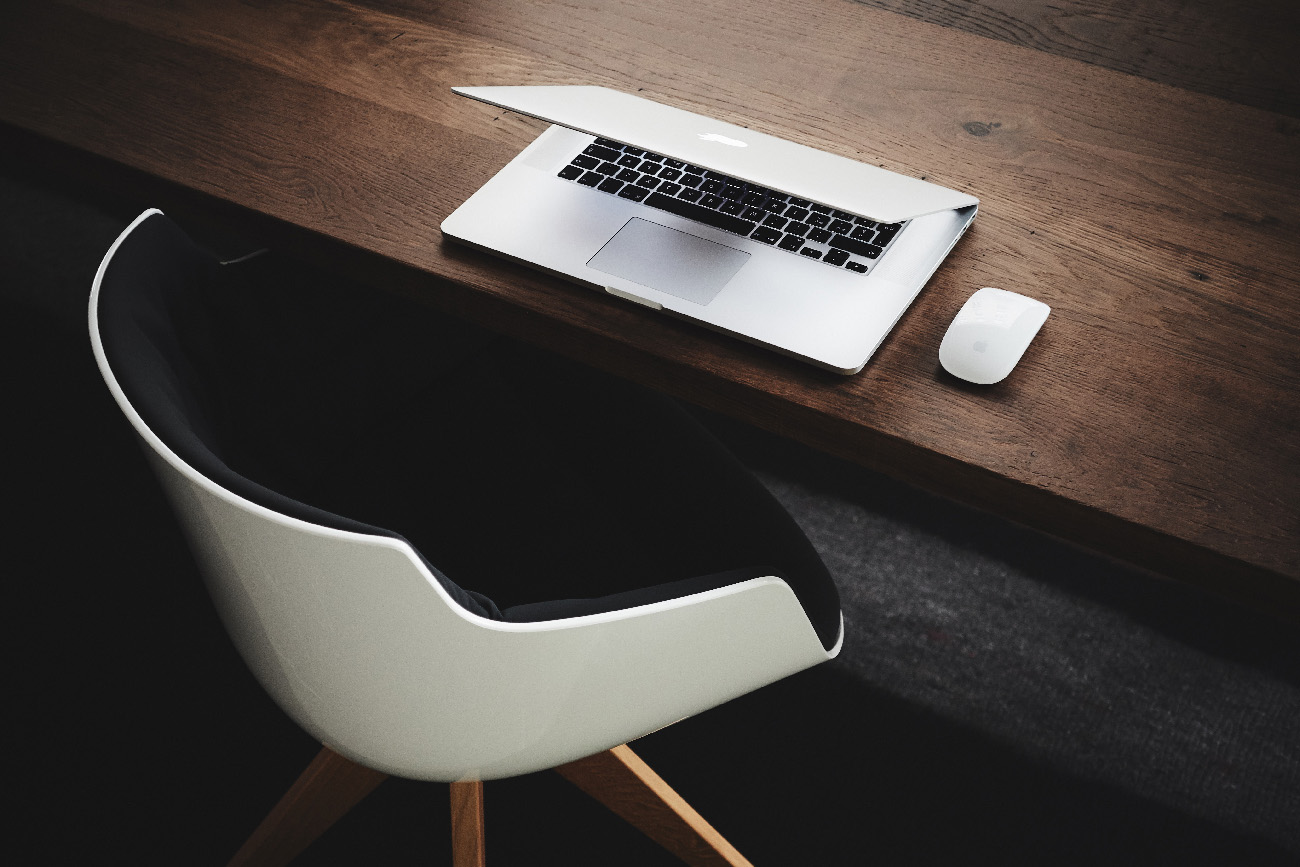 When I was writing my PhD, I spent days, weeks, and months procrastinating. Much of this came from a feeling of being stuck, or of feeling inadequate to the task of what I knew I had to write about. I can see now that I made a couple of mistakes that led to this situation.

I tended to think about big tasks rather than small ones – e.g. “write that paper” or “draft that chapter”. What I should have done more (and what I learned to do towards the end of the process) was to break down tasks to the smallest manageable units. These were usually paragraphs, and the job of each one was to argue a particular point.

Having something small and manageable to focus on not only helped me to articulate my thoughts – it also reduced the fear and insecurity I felt towards the task of writing, because I finally felt in control of the process (even though it remained challenging).

9. Start anywhere – and don’t delete anything

A text doesn’t have to be written in the order it will be read – there is categorically no need to start at the beginning. Indeed, the beginning is probably not a good place to start, because the idea or argument that we have in mind when we begin will probably be more easily expressed as a conclusion. Particularly if you’re feeling stuck, just start anywhere – start with whatever is on your mind, and see where it leads.

Also, instead of deleting sections, just paste anything you remove from your draft into a second document. Usually I just have a text editor document open which I just save as “article cuts” or something. Psychologically, this frees you from the fear of “losing” some of your work in the editing process. It also means that, if you want to reverse your decision to exclude something, you can always paste it back in. Sometimes this way of working simply allows you to write out the same idea in slightly different language.

10. Resist the temptation to edit as you write

A sure way to get demoralized is to try and write things perfectly the first time. You’ll end up spending 2 hours try to get an introduction word-perfect before you even start on the meat of your article… and when you do finally finish, you’ll realize that the introduction needs replacing anyway. It doesn’t matter how dreadful your first draft is, because nobody but you is going to see it. The important thing is that you will have words down on paper, and this will give you a place to start refining your ideas and tightening up your prose.

11. Edit to strengthen and simplify

In my view, the process of editing a draft has three crucial aims:

12. Your headings should read as a summary

This is sometimes hard to achieve, but ideally, you should be able to string together all the section headings in your article, and they will more or less produce a summary of what your article says. This is a sign that you’ve written something that is structured and well argued. Online, it also aids readability and shareability, because even if someone is skimming your article very quickly, they can still get an idea of what it’s about.

Bonus tip: Get unstuck with freewriting

If you’re struggling to find your flow, consider freewriting, which is essentially an exercise in disinhibition.

Wondering whether design might be for you? You can test the water in your spare time with our introductory short course, Design 101.

It lasts 4 weeks, and you can work on the materials whenever you have time. Each week, you'll get to meet 1-on-1  with a mentor who works in the industry, and they'll give feedback on your work and help you improve.